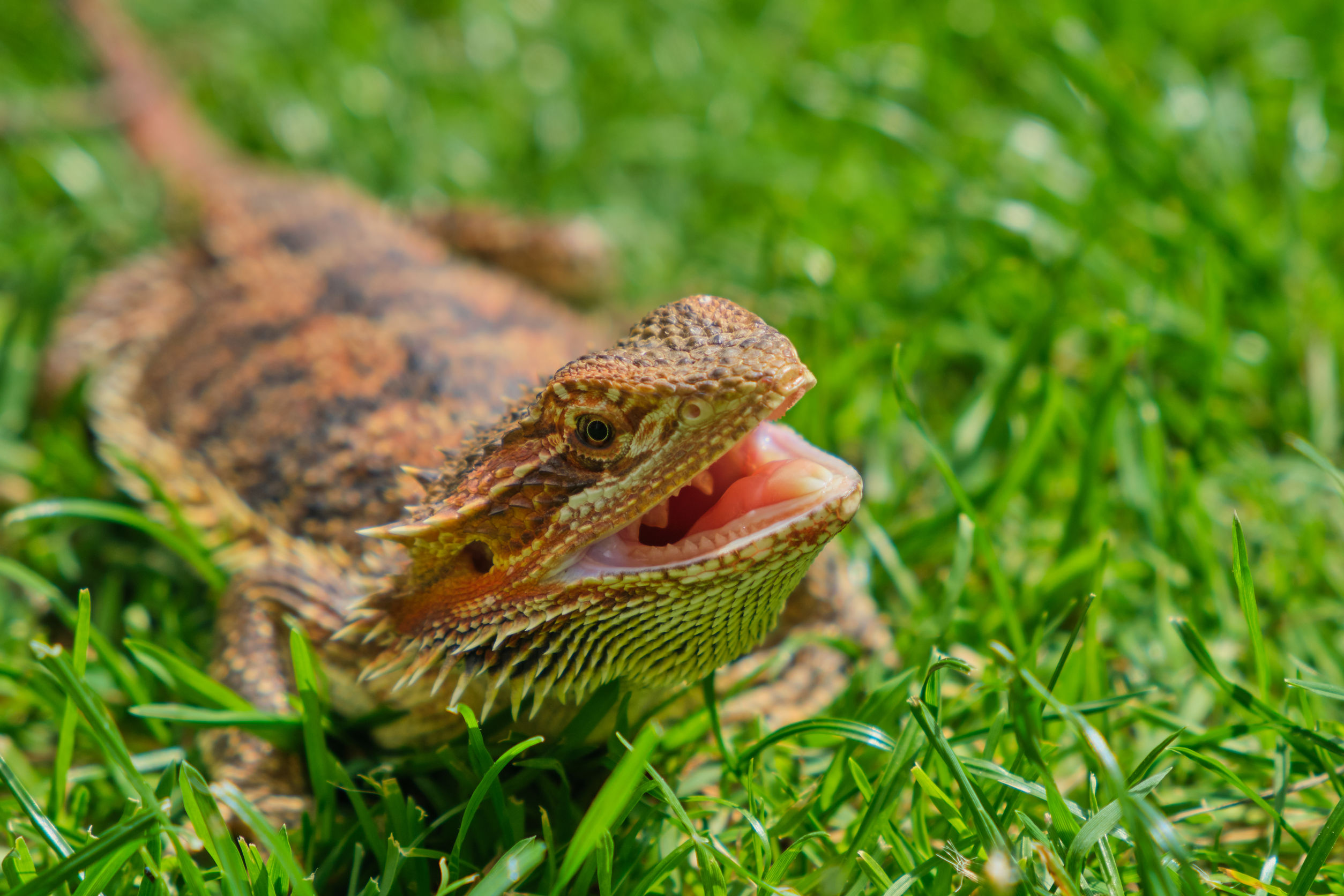 If you’ve ever seen your beardie just hanging out in their cage with their mouth open, you might just think it’s just their way of smiling. While this isn’t necessarily untrue, there are many reasons why a beardie might just leave their mouth open and they aren’t all good. They use their mouths for many things, so if your bearded dragon has an open mouth there is likely a reason behind it.

Their mouths are very sensory and can help with a lot of different things, including helping Beardies convey their emotional states. So much of their sensation is felt through the mouth, so it would make sense that your bearded dragon would keep its mouth open in order to utilize those senses or help regulate its bodies. But what other reasons might they need to leave their mouth open?

Much like dogs leave their tongues out when it is hot to try and cool down, bearded dragons may leave their mouths open as a way to help regulate. Many animals don’t have the capability to sweat in order to cool their body temperature, and beardies are one of them. If their terrarium gets too hot, they will open their mouths to halt the warming of their body to attempt to keep it at optimal temperature.

Now, this isn’t something you should worry about if they are just hanging out under their basking bulb. They are enjoying the warmth and are just trying to keep their temperature from rising too high. If they are doing it in other parts of the cage though, you might want to take a look at your temperature gauges.

They thrive well in environments where there is a warm side and a cooler side. It is optimal for them to have a side of the tank with a basking lamp so they can warm themselves, but they need a side that is a little bit cooler so they can regulate their temperature effectively. Always make sure that the temperature on their basking side is between 95 and 110 degrees, whereas on their cool side it should be around 85 degrees.

Of course, this needs to be adjusted around nighttime, but if they are holding their mouth open at night then you know the temperature is off.

Bearded Dragons are very calm and sweet creatures, but they are very territorial. They get quite attached to their environments, so when something else is around and infringing upon that they may get aggressive. If they are holding their mouths open because of aggression you’ll also see other behaviors to help clue you into what’s up.

These other behaviors are things like hissing, puffing up, their beard going black, and some rapid head bobbing. It is easy to decipher if your little one is feeling aggressive and uncomfortable as they make it very known when something is in their space that they don’t want. They can get territorial if they see something like another pet enter the room, or they spot a bird out the window.

They also should never be left in a tank with other beardies as they don’t enjoy having others in their space. Unless you intend on mating a female and a male, they should have their own space to be able to thrive and be comfortable.

It is also advised to try and keep other pets away from that space. Even if your dog or cat is curious, it can really alarm your little dragon as they might think it is a predator. The beardie may hold their mouth open as a warning to try and make themselves look more intimidating to your other pets.

Beardies enjoy having a space that is entirely theirs and you can make them feel more at home and comfortable by making their space unique to them. Special hides and different decor can really make your little buddy feel at home. If they feel they have a place to go to get away for a little while, it can make all the difference.

Reptiles shed their skin after a period of time and that dead skin can become really annoying if they can’t get it off. Because their skin does not always shed neatly, it can sometimes come off in patches that get stuck. They can be very itchy if they stick and they may stretch their beards by opening their mouths up to try and dislodge some of that dead skin.

This is a perfectly natural occurrence and shouldn’t be anything that concerns you.

It may seem odd if your little guy appears to be acting aggressively and holding their mouth open without any apparent cause. This could be due to their hormones taking control and urging them to mate, but without anyone to mate with it will just lead to empty aggression. You just have to let it run its course and eventually it will stop and your little guy will be back to normal.

If they are in an environment with other bearded dragons, they may open their mouth as a way to show dominance. Male beardies do not like when other males get in their space and especially if they are vying after the same female for mating, they will showcase signs of aggression as a way to get the other male to back off.

They may pair opening their mouth up with blackening their beard and puffing up to look bigger and more enticing to the female. They want to look more appealing than the other male that’s around so they will do whatever they can to beat them out for the attention. Females may also do this to other females to get them to back off and get the male to pay attention to them.

As long as you tend to keep your little one away from others, you shouldn’t really have to worry much about mating instinct being the reason your bearded dragon has its mouth open. Just monitor their behavior, but don’t worry too much if this seems to be the case.

Bearded dragons have a very specific environment they thrive best in. They need it to be warm and dry as large amounts of humidity are not something found in their natural environment. Too much humidity can actually cause a huge amount of detriment to their immune system.

It is highly likely that they will develop a respiratory infection if they are left in humidity for too long and they will open their mouth because it is uncomfortable. They are trying to regulate their temperature while also trying to show that they are in pain and don’t feel well.

It is recommended to keep water sources away from your heat bulbs as it will only make easier for humidity to form. If you want to keep it warm and dry you’ll need to monitor temperatures and ensure that their water isn’t overfilled. Beardies need a little humidity and it isn’t going to hurt anything, but too much can be really detrimental.

If you’re worried your beardie might be sick, look for the other behaviors that they might be exhibiting. Lethargy, lack of appetite, and general tiredness are all signs that your beardie is not functioning optimally. You should consult your vet if you’re concerned that your bearded dragon is feeling unwell and leaving their mouth open could be a big sign that there’s something up.

While it may not be the most alarming behavior your little friend can exhibit, it is still important to pay attention to all the cues your beardie is giving you. It may not be something that will be negatively impacting them, but it is still a good idea to know exactly what might be up with them. They are usually such calm and easy-going creatures so an open mouth might just be a normal occurrence just like waving or head bobbing.

If your beardie has other behaviors that are paired with leaving their mouth open, that’s when it is really time to figure out what might be causing them. Something as simple as aggressive behavior could mean you need to remove your other pets from your room, or that they are in mating season. If they seem to be glass surfing and keeping their mouth open they may be overheated and trying to get out of the space.

Keep an eye on their temperature, the water levels, and if they are in their shedding cycle and you should be able to decipher what their behaviors are trying to signal. They are wonderful pets to have and they aren’t very difficult to maintain, but they do require attention and intuitiveness to be able to keep them safe and comfortable. If you just keep an eye on them and give them plenty of love, they will be just fine.