Beardie Been A Little Snappy Lately? 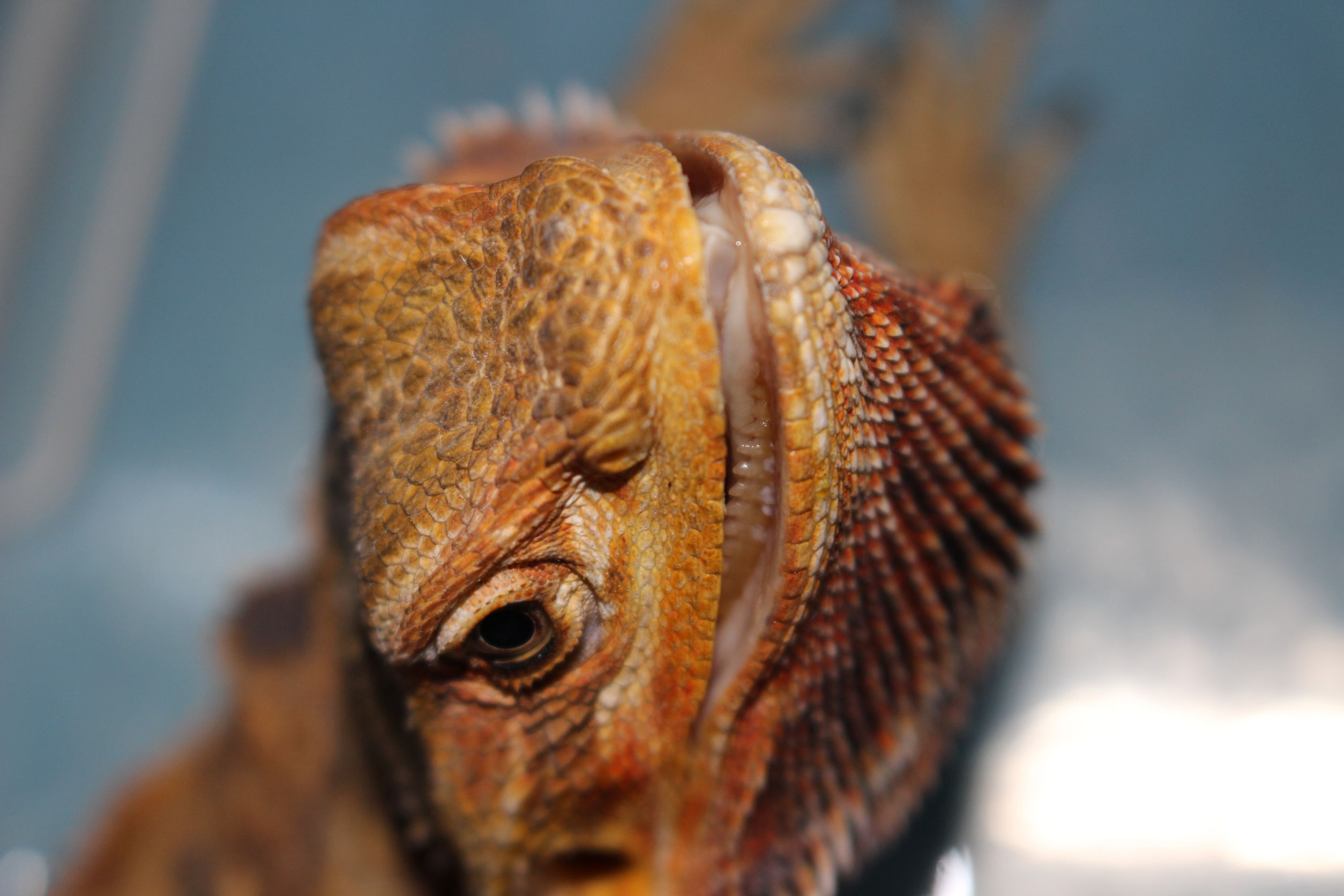 Bearded dragons are generally passive and mild-mannered creatures. They have their environments that they are comfortable in and they like to spend time with their owners, but generally enjoy their solitude. So why would your bearded dragon feel inclined to biting or attempt to bite you or someone else in your home?

Because beardies are so calm it can be slightly alarming if your buddy tries to bite you unexpectedly. They don’t bite very often, but when they do it can seem like something might be really wrong with your pet. Though it might be confusing, there are plenty of explanations for biting bearded dragon that are easy to decipher, so you shouldn’t worry too much.

So why is your little guy biting? Let’s talk about how you can tell what’s going on with your buddy, and hopefully stop the biting for good.

Why Is Your Bearded Dragon Biting?

It might be that you’re new to the beardie life, but if your bearded dragon has started biting recently there may be a few things going on that you can rectify. Usually they’ll be due to something innocuous, but it is always important to be aware of what in their environment might be off at any given time. Their behavior is a good indicator that they are acknowledging something good or bad and you can gauge what’s wrong by paying attention to the signals they’re giving you.

So why is your bearded dragon biting suddenly? There are four main reasons why this behavior might be happening. They might be:

It takes a lot to get your dragon to act aggressively enough to bite, so if they’ve gotten to that point it is time to assess the situation.

They have heightened senses that help them sniff out when their food is around. If you happen to not wash your hands after handling their food, or food that they would typically eat, they might think you’ve got something in your hands that you aren’t sharing with them. If they catch the scent that food has entered their environment, they will be quick to find the source.

So if that source is your fingers, you might want to watch out.

They smell primarily through taste, so if they think they smell food they might take a nibble of your finger just to check if its edible. If your buddy is particularly hungry and you’re either feeding them from your hand or you’re setting food down in their bowl, they might get overeager and chomp down on you accidentally. It can be a little difficult for them to differentiate between your fingers and whatever tasty treat you’ve brought for them.

Just make sure when you’re setting their food down, or you’re feeding them from hand, that you try to keep your fingers out of the way of their mouth. While a bite isn’t particularly dangerous, it can be a bit painful if they get you hard enough. If you keep them on a good feeding schedule and pay attention when it’s chow time, you’ll be good to go.

If you’ve noticed that your bearded dragon has started biting recently, they might be feeling tense because they’re on the defensive. If their terrarium is close to a window, they may be seeing birds and squirrels come and go and think they are predators that are close by. Beardies don’t really understand the concept of being behind glass, so to them those creatures out the window seem closer than they are.

They could also be on the defense because you’ve recently brought someone new into the home and they feel like their territory has been compromised. They may no longer feel safe in their environment because they aren’t accustomed to the other people or things in their space. The same goes for other pets like cats and dogs who might be viewed as predators or threats by your little dragon friends.

Usually if they’re feeling defensive, you’ll notice they will also have a black beard and are puffing it out to show their aggression. If you notice them acting this way, you can avoid a bite by letting them calm down first before you try and handle them. It is important to see what in the environment might be causing them stress, and try to remove it as quickly as possible.

It is recommended that you try to set up an environment that is just right for them. A specific area in your house or your room where their tank can be set up and there are no other animals that will come to invade their space. Your buddy should feel safe in their space so making it perfect for just them can reduce stress and keep you both happy.

You can usually tell your pet is feeling scared if you find them digging, waving, or glass surfing, but biting can mean whatever they are afraid of is really severe. You may notice that they bite when someone new is holding them, which means they don’t trust the person yet. If they end up biting someone you’ll notice that they start up those other behaviors first as warning signs that they feel unsafe.

It is important that your little one feels like they aren’t being encroached upon in their environment. They should have a safe space just like you do, and for them their tank is their safe space. If a stranger pulls them up out of that space, it is like if a stranger came into your home unannounced.

They might also show their fear if you’re handling them while your other pets are in the room. They might bite you as a way to let them down or let go because they want to flee. If they feel like they’re going to be attacked they will do whatever they can to get away from the apparent threat.

That includes a swift bite on the hand.

If you are handling your little friend incorrectly, they may start to squirm or be uneasy while you’re handling them. You are the person who takes care of them and ensures that they have everything they need, so if you aren’t holding them right or caring for them like they need to be cared for they may lash out. Beardies are so small that if you lift them incorrectly you can put stress on their joints or cause them pain.

You should never lift them with one hand, always pick them up slowly and with two hands so you can support the different parts of their body. Their stomachs should be down mostly and make sure that you don’t grab their tail or their legs. If they feel particularly uneasy like they don’t want to be picked up they might hide from you.

If they do hide, be sure that you don’t try to pull them out. They are hiding for a reason and shouldn’t be prodded to come out if they don’t feel safe. If you try to pull it out from under something or behind something they may bite because they feel threatened.

What To Do if They Bite

If you do end up getting bit by your dragon, you should first make sure your its in a secure location. If they bit you while you were holding onto them you should try not to drop them and put them safely back in their enclosure. If you were reaching into the enclosure and they bit you, they will already be secure and you should just check that everything is all right with them before you tend to the wound.

Once you know your pet is safe, survey the wound to see if there is any bleeding. If they didn’t break the skin, it will be a lot easier to clean up and tend to. Just check the area for redness and make sure it is cleaned up properly.

Bearded dragons carry salmonella, so whether they broke the skin or not it should be thoroughly sanitized. Once you’ve cleaned the area, check to see if the bleeding is still active. If it is you should put pressure on the wound to try and stop the flow.

Once you’re sure the bleeding is mostly stopped, it is recommended to use an antibacterial cream or even rubbing alcohol to make sure the area is completely clean and won’t develop an infection. Make sure you wrap it up nicely and keep it bandaged so it isn’t exposed to the elements.

Beardie bites may not be incredibly common, but they do happen and you should be prepared to evaluate the sitution as soon as it does. Pay attention to their other behaviors and look for the emotional signs that something is up with them or their environment. They are rather expressive creatures, so it shouldn’t be too difficult to decipher exactly what is awry.

Just make sure you are keeping an eye on them and their enclosure whenever something in your environment changes as well. A new pet, or even just having a friend over can alter their behavior entirely. Something as simple as having a dirty tank can cause them stress and can lead to a possible bite if they feel uneasy enough.

Holding them properly, scheduled feeding times, and cleaning their tank regularly, can reduce stress and ensure that they are living comfortably. Like we have routines, bearded dragons also thrive well with specific schedules and do well with their solitary time. They should be safe in their environment without any additional dragons in their space as well as they can be very territorial.

Every dragon is different though. Knowing your dragon and their specific behaviors is the best way to avoid the possibility of a bite. Beardies don’t just bite willy-nilly and as long as they feel secure in their environment they shouldn’t be stressed out enough to do so unless they are hungry and mistake you for a tasty snack.

They are calm and sweet creatures and if they feel uneasy enough to bite that is a real sign that their environment is uncomfortable.