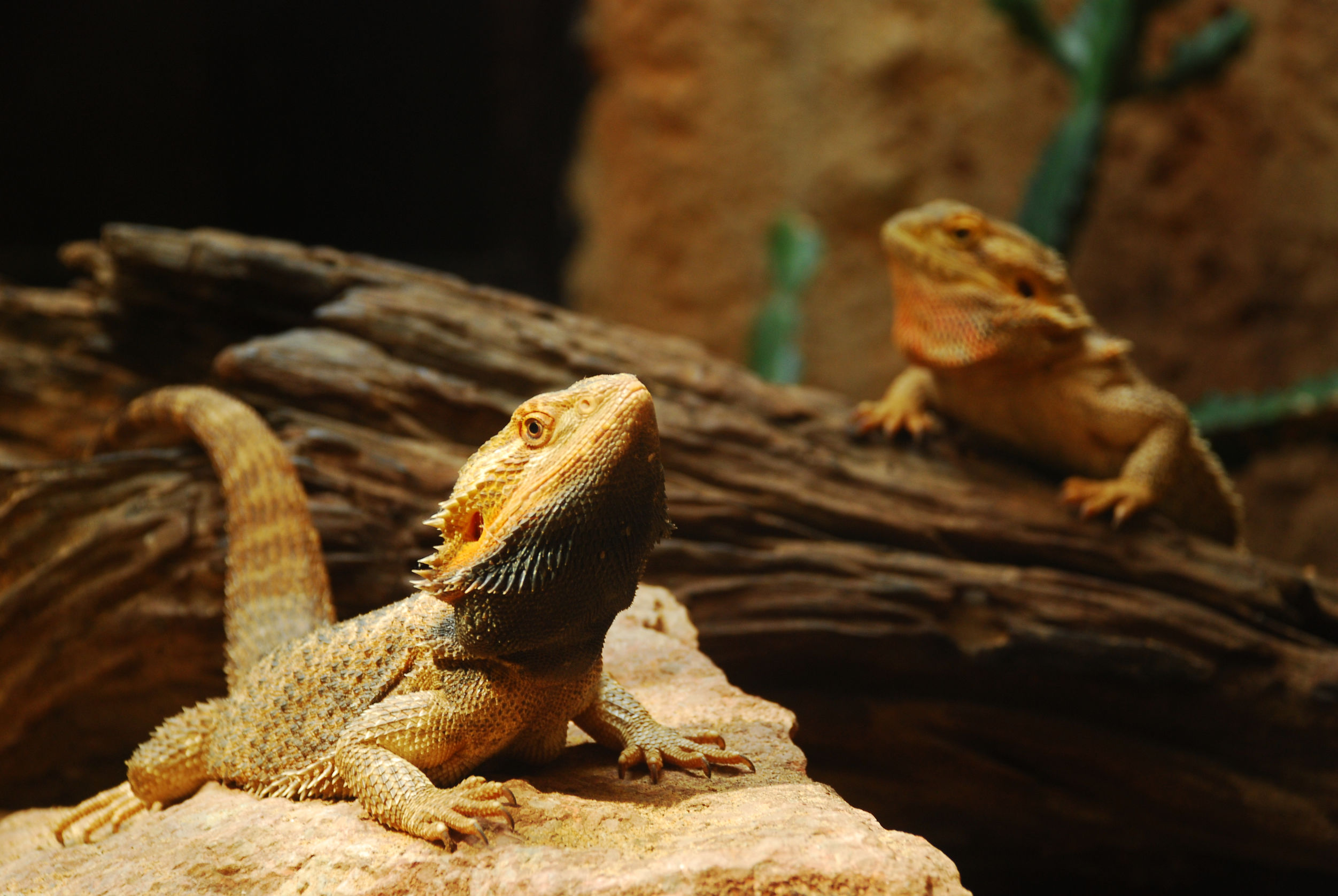 When you think of the phrase black beard you might conjure up the mental image of a fictional pirate. It is a strange term to be sure, but a black beard does refer back to something that a bearded dragon can face if things aren’t optimal in their environment. Bearded dragons are named because they have a spiky beard that puffs up occasionally when something is amiss.

If the beard of a bearded dragon happens to turn dark or black though, it isn’t an immediate cause for alarm. While it can be a little bit scary to see it change so quickly, other behaviors usually accompany it to let you know that something’s up. If you pay close attention to your beardie’s environment, you’ll be able to tell right away if something is off from the norm.

So what causes a bearded dragon to have a black beard? Like most of their behaviors, several things can cause it, but we are going to help you learn what they are and how to identify them.

Let’s dive in, shall we?

What is Black Beard?

This is pretty self-explanatory, but as we mentioned above, beardies have a spiky area on their neck that puffs up for different reasons. This puffing can happen at any time but when it turns black and puffs is indicative that there are issues in their environment. This darkness can be kind of concerning as you might think there is something wrong with your beardie internally, but this isn’t always the case.

A black beard can be due to many things, including but not limited to:

Any of these things can cause that big puff up and the blackening of their beard, but as long as you keep an eye on them and their environment you should be able to figure out the cause pretty quickly. But how do you identify these as the source of the problem? There will likely be additional signs in their space or that they are showcasing themselves to help guide you to the cause.

Beardies are very specific about their space and they don’t like to share it. They claim their territory and anything that enters it has the possibility of being seen as a threat. It is unwise to put other beardies in their space as it may make them feel territorial or even frightened.

They puff up and their beard goes black because they feel like someone else is encroaching on their territory and they are trying to get aggressive to combat that. This can also happen if you have other pets that like to wander around near what your beardie considers their space. If they see your dog wandering around your bedroom close to their terrarium, they may get black beard in order to try and scare them off.

This also goes for if they are in a mating mood. If they see a female beardie and there is a male nearby, they can get very territorial and go black bearded in order to try and scare the other male off. They want the female beardie all to themselves, so they will go out of their way to try and get any other male dragons to back off of what they want.

This can also be a clear indicator of if they are feeling angry or annoyed. It could also be because someone is in their space, or because they feel bothered by you. This can happen due to baths, mishandling, or even because they’ve seen something that frightened them and now they feel aggressive.

The best way to handle this is just to give them plenty of space while they’re black bearding. Don’t fuss with them too much and they will calm down eventually and return to normal. Like anyone they just need some time to cool down and for whatever was bothering them to be resolved.

If they are in a weaker state and feeling sick, they may black beard themselves as a tactic to still appear intimidating. This is a defense mechanism that they have adapted from living in the wild, as even if they are sick in the wild they need to protect themselves against predators. If they appear easy to attack, then they will be a good target for predators.

They are still on their guard, even in captivity because it is something that has been ingrained in them by evolution. If you’ve noticed they are black bearding but also seem to be rundown, check for other signs of illness like mouth gaping, stiffness, or keeping one eye closed. They could be suffering from all sorts of things that you might be unaware of, and the black bearding may be the first sign that something is amiss.

We recommend that if you notice any odd behavior from your beardie such as lethargy, stiffness, or loss of appetite, along with the black bearding, you consult your vet as soon as possible.

Darker colors tend to absorb more heat, so if your beardie is cold and they start turning dark or black, they are trying to regulate their temperature. It is imperative if you are going to be a beardie owner, that you set temperature gauges in your enclosure. Keeping an eye on the temperature is crucial as it is the key to keeping your beardie comfortable and well.

If the temperature dips below a certain point, your beardie will struggle to thermoregulate and could even become ill if it is left for long periods of time. Warmth is important as they are cold-blooded and come from a warm, dry, climate. So in order for them to thrive, they need the temperature to be warm enough in some areas sothat they can be comfortable, and cool enough in others so that they aren’t overheated.

Even though bearded dragons tend to be less sociable than other pets, they trust you as their owner and want to spend time with you. They can get antsy being cooped up in their tank all the time, so they make go black bearded in order to get your attention to take them out. They want to be loved on and played with just like any other pet, so they will do what they can to try and get you to notice them,

If they press themselves against the glass and are puffed up with a black beard, chances are they just really want to play with you. Even if it is just a good snuggle session, or having you feed them by hand, it can make all the difference to your buddy if they feel stifled in their tank.

Brumation is essentially hibernation for bearded dragons. They get all ready and tuck themselves away for a nice long nap to help them last through the colder months. They get very lethargic and essentially spend all their time sleeping to keep up their strength when it’s chilly.

If your beardie comes out of brumation and you’re noticing they are black bearding, chances are they are just a little disoriented. Brumation can throw off how your beardie naturally interacts with their environment as such a long sleep can make everything feel a little off-kilter. They may be showcasing a black beard because they feel a little uncomfortable now that they are awake again.

It may take a little time to get them readjusted to their schedule and being awake when it is bright, but eventually they will adjust back to normal. It’s just their little way of being a bit grumpy after waking up from a long nap. But you’d be a bit disoriented too if you’d been asleep for that long and were adjusting back to daylight.

While it can be a bit alarming to look over and see your little dragon suddenly all black bearded and puffed up, it is easy to assess the situation and adjust things as necessary to return your beardie back to comfort. They want their environment to be entirely their own and sometimes that means making a spot for them in the room where their tank isn’t visible to things outside the window or available to pets who may be passing through.

A good rule of thumb to have with bearded dragons, is to keep an eye on how they are faring in their environment. Their space is very important to them and it can be difficult for them when something is amiss in it. Simply keeping a routine and ensuring the tank is clean and out of the way of distractions can make all the difference for your beardie buddy.

If you’re really concerned that your bearded dragon has a black beard often and you can’t figure out the source of their tension, engage in some trial and error. If nothing seems to work, it is recommended you consult your local vet for any questions you have that are concerning.

Why Is My Beardie Hissing?

The reasons that your bearded dragon might be hissing at you or around their environment, are…

Designing The Best Habitat For Your Beardie

If you want to keep a bearded dragon in your house, then it's really pivotal for…

Want A Free UVB Lamp Delivered To Your Door?

Enter your email address below for a chance to win a ReptiSun T8 10.0 UVB Lamp in my October 2020 giveaway.
You'll also learn The 3 Most Common Mistakes That Decrease Your Bearded Dragon's Lifespan and be signed up for my exclusive newletter.
We will never share your email address.