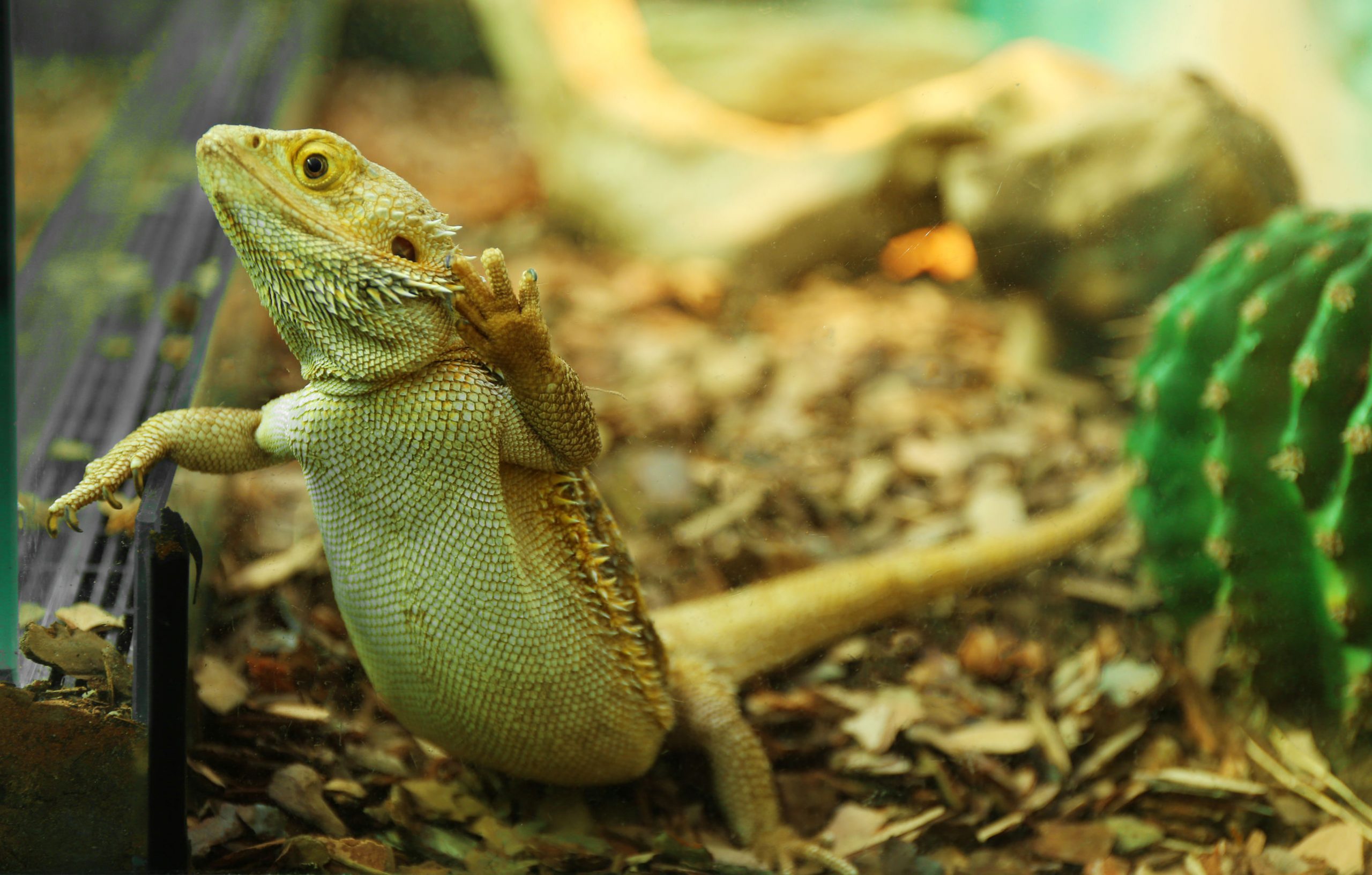 If you’re a new beardie owner, you may be wondering why your new bearded dragon seems to be waving at you. You might think it is their way of greeting you when you enter the room, but this isn’t necessarily the case. Beardies can wave at you for a great number of reasons, but not all of them are as nice as simply saying hello.

There are four common reasons why your bearded dragon might be waving or moving their arm in a circular motion. These are things like:

While these are all incredibly common, you may want to identify exactly what is causing the waves so you know your little one feels comfortable in their environment. In order to better understand the reasons why your bearded dragon might be waving, let’s take a deeper look at each reason.

Beardies are gentle creatures with calm temperaments, so they tend to be passive when going up against or coming in contact with creatures that are larger than they are. They don’t know you are their owner specifically, which means to them you just appear to be a bigger and stronger animal that rules over the environment they live in. They do understand that you are there to care for them, which means naturally they must submit to you.

In this way, it is actually quite similar to when you wave at someone to acknowledge them entering your space. They are acknowledging your presence and showing that they respect and submit to you. It is like in olden times when people used to bow and curtsy to show their respect.

Your little buddy just wants you to know they know you’re going to take care of them and that they are going to be respectful of you in return.

If you have other beardies that are in the environment, you might find that a younger dragon may submit to the older one by waving their arm. This is especially common in baby dragons that have older or larger siblings that are near to them in their tanks. It isn’t uncommon either for nervous beardies to show submission waving to your dogs, cats, or other pets that might be wandering around their environment.

Bearded dragons are such passive and calm creatures that they often want to avoid aggressive or uncomfortable situations. So by waving, they are showing that they would rather submit and relax than start a fight.

Like any creature, Beardies want to feel safe in the environment they live in. There could be several things that are causing them to feel fearful and waving is their way of letting you know something is wrong. Pay close attention to when they wave, because this can clue you into what they might be afraid of.

They do not fair well in tanks with other bearded dragons as they can be very territorial of their space. They may be feeling intimidated or unnerved by the presence of another bearded dragon in their tank so arm waves may be their cry for help. It is advised to give each of them their own tank with their own things so that they can be comfortable.

They may also be fearful of other pets in the home. They may begin to wave if they see your cat coming in the door as they have learned to submit to you and be comfortable, but they aren’t sure what this other creature might do. It may be best to keep it’s tank in an area where your other pets can’t get to so that they can feel like the environment truly belongs to them.

To put your little buddy at ease, you should ensure they feel safe and at home in their terrarium. Get some plants or structures for them to hide behind or underneath if they are feeling uneasy. Try to keep their tanks away from windows as well, as seeing birds or other things moving around outside may also make them fearful.

Because beardies are very aware of when other creatures are in their space, they may be waving for a reason you haven’t even thought of. Some beardies will notice their reflections in the glass of the tank and think that another bearded dragon is in the tank with them. This waving may be their way of telling you that an unauthorized creature has entered their area and that they feel fearful or confused.

You may attempt to relocate the terrarium to minimize reflectiveness, or even add things to their terrarium like backgrounds so that they don’t feel unnerved by the imaginary beardie they keep thinking is in their tank with them. This also goes for windows, as your beardie may be confused by a bird that has perched on the windowsill near their tank and think it is a possible predator that is closer than it actually is.

Confused waving may also be accompanied by other behaviors like puffing, glass surfing, hiding, digging, or even running around their tank. They may be trying to showcase that something isn’t right in their environment in hopes you will understand and try to fix it.

Beardies can also become confused by light, temperature, and humidity changes, and may start waving to show you that something has changed or is a little bit off. As long as you keep an eye on their environment though, their confusion shouldn’t be much to worry about.

Arm waving may go hand in hand with a few other behaviors if your beardie has spotted someone that they find attractive. This is most common in female beardies as they will wave to get the attention of males who may be showing themselves off through puffing or other behaviors. This is their way of saying that they are available, they acknowledge the other dragon, and they are ready to mate.

While this may not be the most common reason, it is important to pay attention when your dragon is in an environment with another of the opposite sex. If they start feeling frisky, the waving is likely to occur as the female is showing that she submits.

Should You Keep an Eye On It?

A Waving bearded dragon isn’t really something to worry about, as it is common enough behavior that it isn’t typically showcasing there is something up with it’s environment. But because there are many reasons why your pet might be waving up a storm, it is important to keep an eye out in case it starts getting out of hand. What might have begun as a way to show submission to your or the other members of your household, could very well evolve into another issue.

Your beardie could easily become uncomfortable with something in their environment and try to wave at you to show they are confused or fearful, but you might not understand the difference between that and their submission wave. That’s why it is important to monitor your beardie daily, and ensure that their terrarium and spot in the house are entirely theirs so they can feel right at home without any distractions.

It is so common a behavior though that it shouldn’t be something you seek to stop. Your beardie could be in optimal conditions, and still be waving their arm all day every day. As long as you’re keeping an eye on other behaviors and they don’t seem to be showing any other odd signs, you should be just fine.

Bearded dragons are such calm and passive creatures that their waves should typically be seen as a sign that they are comfortable in their environment and they acknowledge you as their caretaker. Like dogs wag their tails and pant, and cats rub up against people, your little one is usually just showing they are happy with you and satisfied that you are the one that is going to be handling them from now on.

Because of their genial nature, beardie’s make wonderful pets for people who want a creature that is going to be calm but also expressive enough that they know what they need and when they need it. Taking care of your little guy and monitoring its needs shouldn’t be too much guess-work as they make it pretty easy to track their emotions. Your new buddy just wants you to be aware and enjoy the time you spend together.

If you’re worried that your bearded dragon is waving because of reasons you can’t decipher, it never hurts to call your local vet or pet store to see if they might know something you don’t. Trial and error however, should be able to help you get a good read on exactly what is causing the arm waves without having to take drastic measures. Every beardie is different, so yours might just be more prone to acknowledging the other creatures in your environment.

The only thing to do is just make sure your little one’s  needs are met, love them as much as possible, and ensure their environment is comfortable and safe.